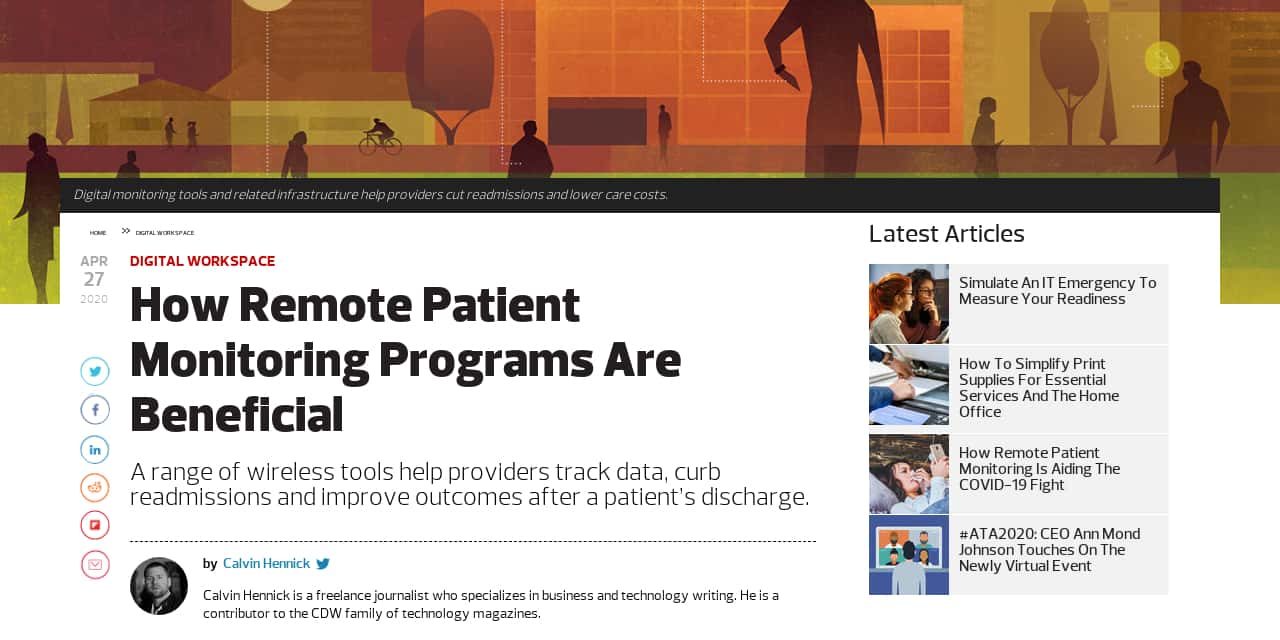 Despite the best efforts of clinicians, some hospital readmissions are necessary and unavoidable. A cardiac patient may develop fluid around his or her heart, or infection could set in at a surgical site.

Other discharged patients may show up in the emergency department after experiencing vague symptoms such as dizziness or a spike in blood pressure, concerns that could be effectively treated without hospitalization, says Dr. Peyman Benharash, director of the cardiac telehealth program at UCLA Health.

It’s why the organization relies on remote patient monitoring (RPM) and telehealth solutions to reduce readmissions and to improve outcomes. When deemed ready, some patients are sent home with wearable tools that track metrics such as blood pressure, weight and oxygen saturation. Combined with videoconferencing, the technology offers a way to keep tabs from afar.

“You can see their vital signs through the monitoring and see the surgical incisions with video, and you’re able to tell if they’re healing well,” says Benharash. “It’s essentially an extension of being in the hospital.”

Such continuity of care helps save time and avoid confusion (another provider’s electronic health record platform could be from a different vendor and lack timely context, for example). And if concerns are detected virtually in the days ahead, the original providers can bring patients back for expedited consultations and treatment, potentially preventing complications.

The technology appears to have a willing audience: A 2019 survey conducted by a wearable solutions provider found that two-thirds of patients 40 and older would utilize a health monitoring device if it meant they could reduce the number of times they had to physically visit a doctor or hospital.

Most RPM initiatives are fairly small, but the technology is having a significant impact, says Colin Buckley, director of market analysis for KLAS Research and the co-author of a recent report on RPM. The report suggests RPM is entering a new age, with more solutions to empower patients and facilitate expansion of use.

“So far, most programs are fairly modest,” Buckley says. “They might have between 25 and 100 monitoring kits they can use at any one time, usually for very focused use cases. But most of the organizations we talk to say they’re having success in terms of outcomes, and these successes often happen very quickly.”

UCLA Health, which launched an RPM program in 2013, has seen the quantity and capabilities (such as an electrocardiogram function) of its tools evolve over time.

Often, the devices — such as scales and blood pressure gauges — connect to patients’ tablets or smartphones via Bluetooth; those consumer devices use Wi-Fi to transmit readings back to the hospital, where UCLA clinicians rely on Apple iPad devices and iPhones to receive and interpret the data.

Although an influx of patient data is valuable, Benharash notes that human healthcare workers are still needed to interpret and act on the results.

“We’re eventually going to need data science and artificial intelligence to sort out some of the meaning behind the vital signs,” he says. “Let’s say your heart rate is 70, and then it goes up to 100: That’s very different from a patient whose heart rate lives at 100.”

The percentage of healthcare providers that have invested in — or are evaluating — remote patient monitoring technologies to support high-risk, chronically ill patients at risk for hospital readmission.

RPM efforts, then, must be designed to meet the needs of patient populations. UCLA Health studies revealed most of its readmissions occurred within the first 10 to 12 days after discharge, Benharash notes, so clinicians increased the frequency of video chats in the first seven to 10 days after a patient went home. They also began to monitor vital signs more closely during that period.

RPM tools have led to what Benharash calls a “significant reduction” in readmission rates among cardiac patients, which declined by about one-third (from 15 to 10 percent).

“Most important, the patients are happier,” he says. “They don’t feel like they’re thrown back out into the world. That reassurance matters a lot.”

Children’s Health in Dallas started using RPM solutions in 2015, first rolling out the tools to help track the vital signs of organ transplant recipients after surgery. The hospital has expanded its testing of RPM pilot programs, and officials expect to soon support about 200 patients in various use cases.

Patients wear a patch that detects when they take their medications, and care providers at the hospital can track that adherence in real time.

The hospital also uses RPM for simple follow-ups, sending out questionnaires via text message and ensuring patients and parents have all of the services they need right on their smartphones, saving them the effort of making individual phone calls.

A primary care physician for every American, scientific advisory group urges
May 4, 2021